From Zero to Search

"How do I manage self managed App Search security, users, and access roles?"

Elasticsearch security features - with a Basic license - are robust.

If Elasticsearch security is disabled, anyone with access to the internal address will become an owner of the App Search instance.

The permissive, security disabled setting is not recommended! It's for experimentation and configuration only.

Please note that certain features described in this guide are only available with an Elasticsearch Platinum License.

Choose from one of three security modes to securely manage access to App Search:

Certain Security and User Management features are only available with an Elasticsearch Platinum license. They are as follows:

Standard security requires configuration of both Elasticsearch and App Search.

It is the default security method when Elasticsearch security is enabled.

Within the Elasticsearch directory, open up the config/elasticsearch.yml file and add:

Next, you'll need to setup a password so that App Search can reach Elasticsearch.

Either mode will result in a set of passwords for Elasticsearch users.

You'll need the password for the elastic user -- it's the default user.

Within App Search directory, edit config/app-search.yml and add your credentials:

The default username is: app_search

The default password is generated for you upon start-up. Look into your console log to retrieve it.

You can also pass in your own default password via an environment variable on first start-up:

And if you haven't done so, setup the mailer so that users can receive invitations.

App Search can use the Elasticsearch native realm as its source of truth for identity management.

Within the Elasticsearch directory, open config/elasticsearch.yml and add if it is not present:

The internal native realm within Elasticsearch is on by default and its where users will be "stored" and managed.

You'll also need to add a secure password as xpack.security.enabled is now true.

Your config/app-search.yml will look as such:

Upon restart, App Search will now be synchronized with the native realm.

User management is done through Elasticsearch.

A Role Mapping makes it so that roles - as App Search understands them - can map to roles as Elasticsearch defines them.

In this way, users are created and managed within the Elasticsearch native realm via API or via Kibana.

Instead of making you manage different sets of users, this allows you to inherit them.

In other words: App Search communicates with Elasticsearch to control user access.

For example, if you wanted to create a user named app-search and provide a password, you'd do that like so:

A role is required -- we provided app-search-user.

If you were creating users within Kibana instead of the Elasticsearch API, it looks like this.

You'll see a screen which allows you to select various mapping configurations: 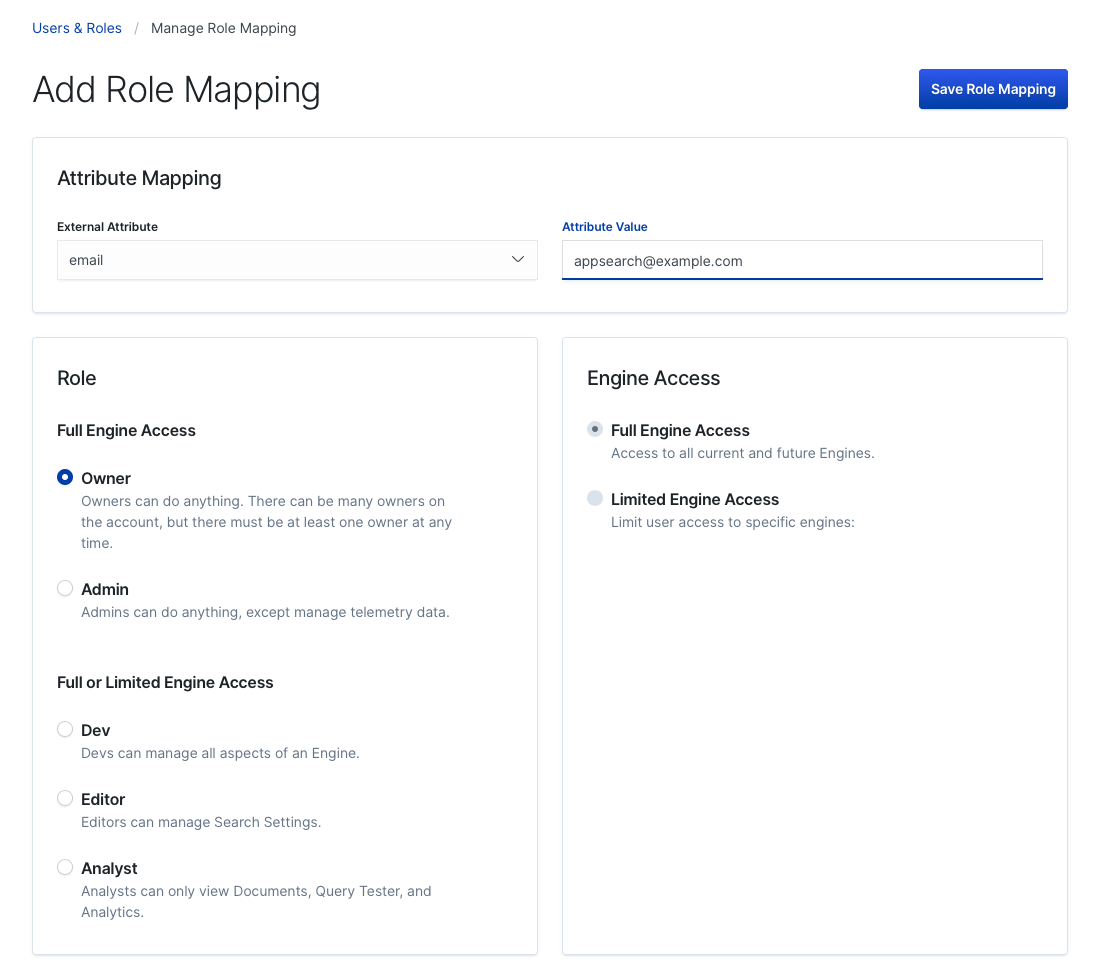 The goal here is to define a Attribute Value for a given External Attribute.

External - in this case - means Elasticsearch.

We created a user above using a role: app-search-user.

If we select "role" as our External Attribute, app-search-user will not be present in the default list.

Elasticsearch accepted the role, but it isn't considered a "proper role" until the role definition has been added to Elasticsearch via the Role API .

An example API request to create a role looks like so:

The "role" app-search-user will now appear under the list of roles available to the role External Value.

Once you have selected an External Attribute and Attribute Value pair, you must then configure the App Search role.

The mapping is a link between two interpretations of a role:

Learn more about App Search roles and their permissions within the Role Based Access Control guide.

Now, any Elasticsearch user which matches the mapping will be able to access App Search.

A user needs to match at least one one mapping so that they can login!

Heads up! If a user matches two mappings, App Search will select the one which is more permissive. In other words, if role A provides read access to one Engine and role B provides write access to all Engines, if a user has both roles, they will inherit the permissions of role B.

It requires a third party SAML provider, like Auth0 or Okta.

We'll demonstrate how to set-up with Auth0.

You'll want to give it a name - like My Saml App, then select Regular Web Applications:

Next, click into your application and go into Settings:

Scroll down until you see Allowed Callback URL.

Enter one that is relative to your app.search.external_url, such as http://localhost:3002/users/saml_login, then save:

Keep scrolling down until you reach Advanced Settings:

We need the SAML Metadata URL. Securely copy its contents.

That metadata URL contains XML which we need to position close to Elasticsearch. We'll do so in the Within Elasticsearch step.

The SAML Metadata URL is near the bottom: 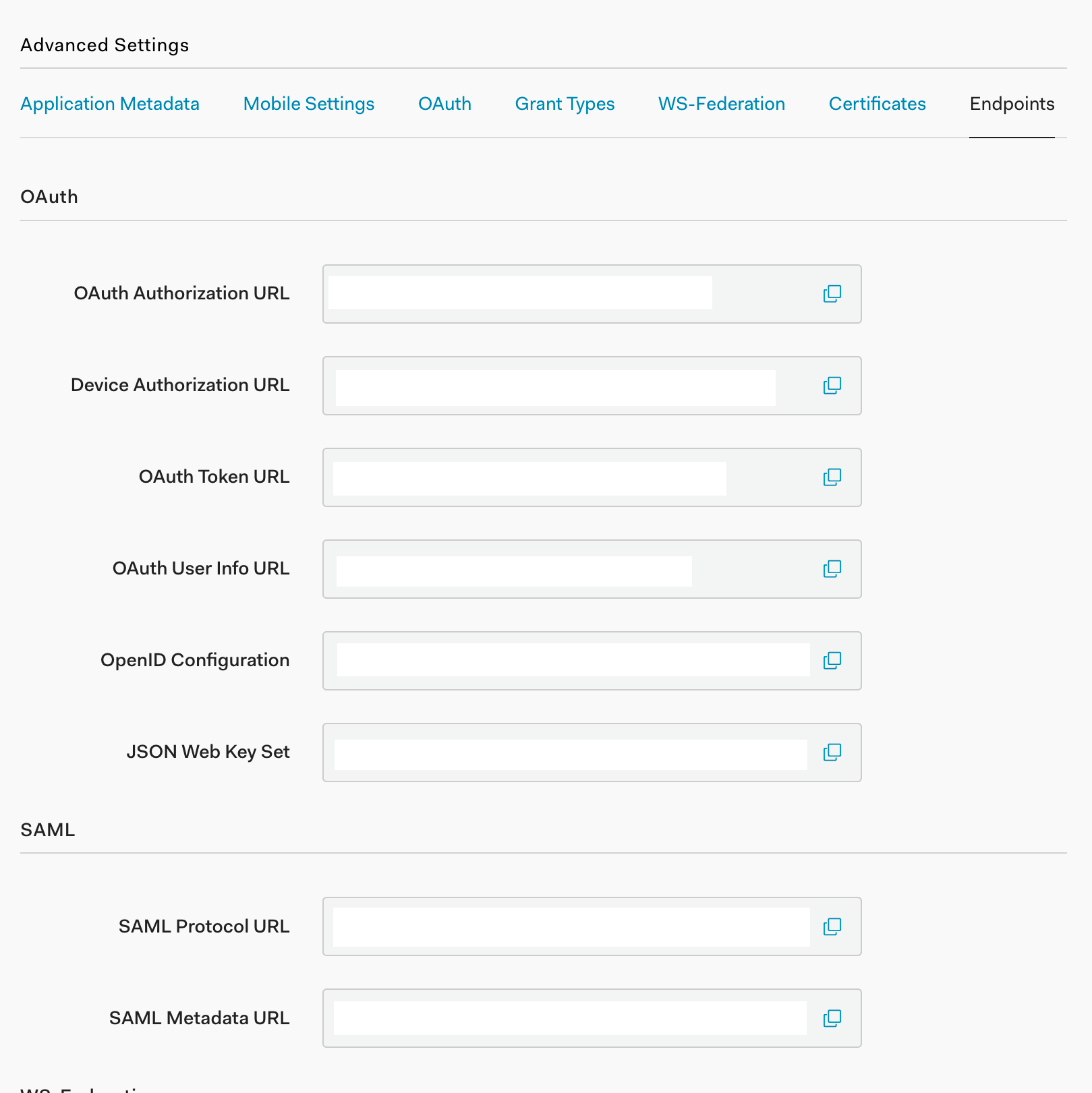 Back in your application menu, head to the Addons section.

From there, locate and activate SAML 2.0: 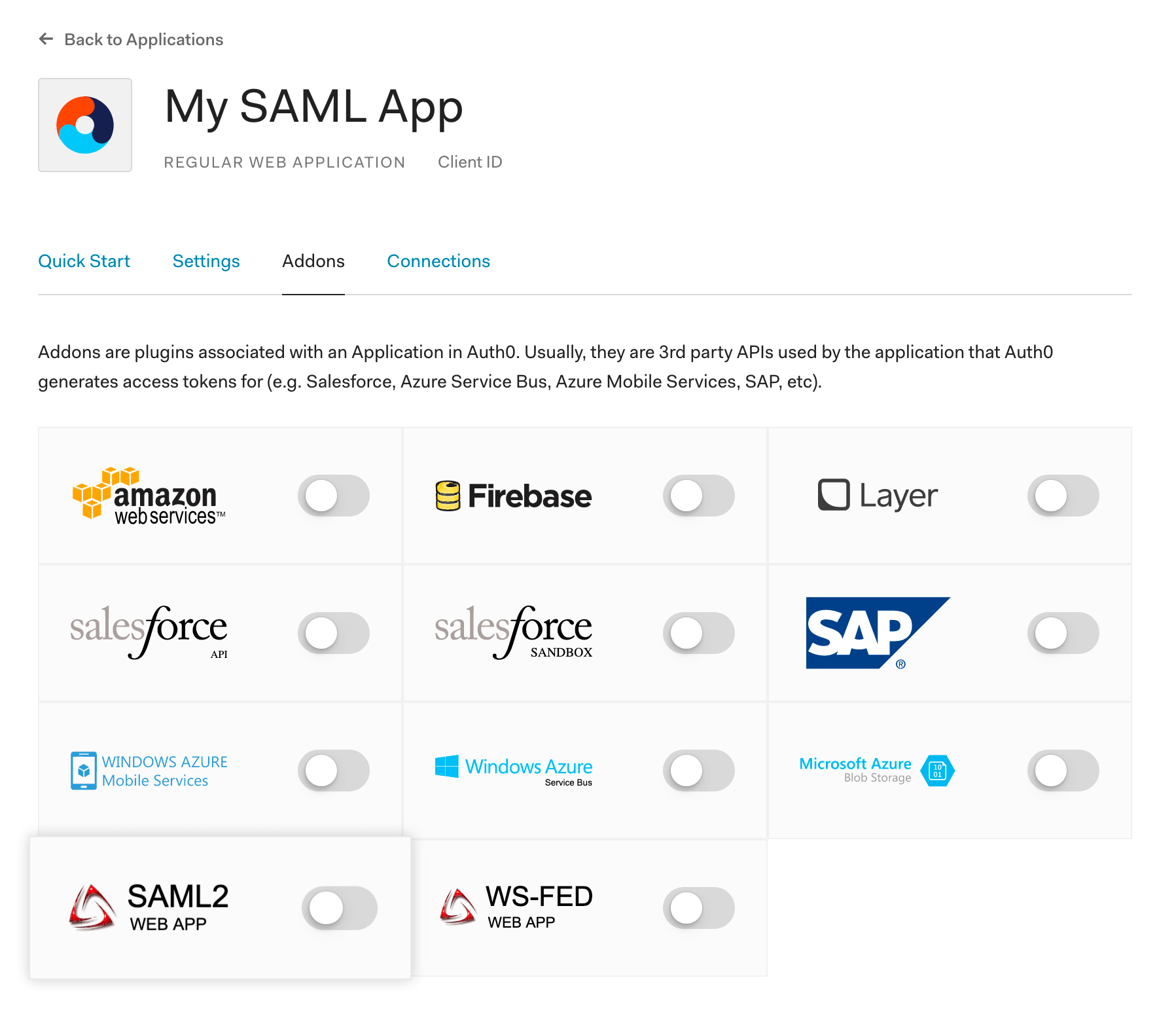 Finally, create a user by selecting Users from the main menu and then clicking the + Create User button: 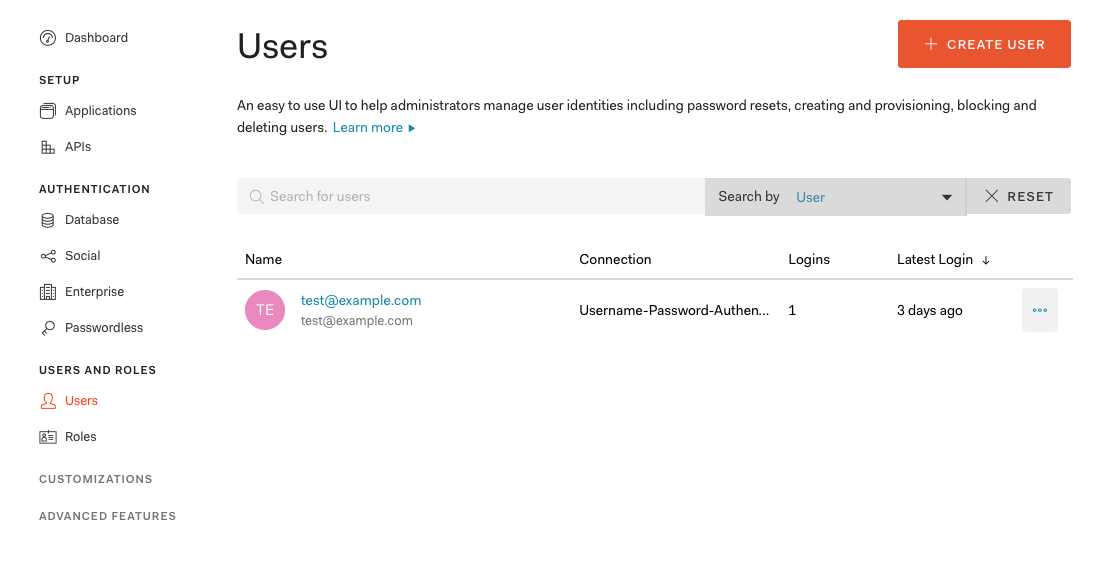 Fill out the email, a password, and leave connection to its default.

Within the Elasticsearch directory, open config/elasticsearch.yml and add:

Within the config directory, create a saml directory and a idp-metadata.xml file within it.

Paste the contents of the SAML Metadata URL file into the idp-metadata.xml file.

The URL has a prefix similar to the example: dev-abc-1234.auth0.com.

Be sure you have added that string as the idp.entity_id, prefixed with urn: as shown above.

We'll set that password and resume the SAML configuration within App Search.

Note that the auth.name must match what is within Elasticsearch's SAML realm.

Visit your App Search URL and try to login.

You will be prompted to do so -- if you created an Auth0 user in the step above, use its credentials.

Within your SAML provider, you'll be able to create users to interact with the Elasticsearch native realm.

You can then use App Search's Role Mapping to coordinate with Elasticsearch.

Read the above section on the Elasticsearch native realm for more information on how to setup Role Mapping. 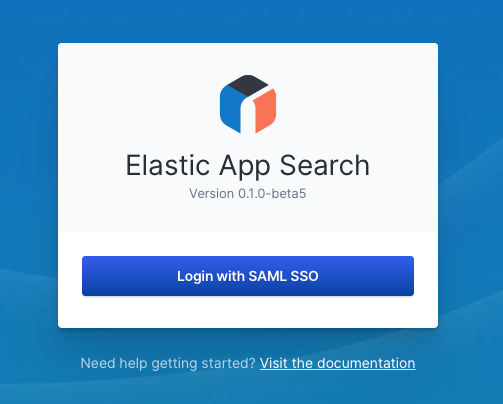 Run the binary with an attached --reset-auth command: